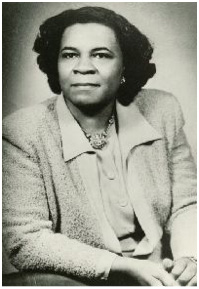 Rosa Slade Gragg was a civic leader who made contributions in the educational, social, and political arenas. She made history with numerous first achievements by a woman.

Understanding the importance of education in the struggle for black progress, she founded the Slade-Gragg Academy of Practical Arts in 1947, the first black vocational school in Detroit. Known as the Tuskegee of the North, it trained over 2,000 women and returning veterans. This was the first black owned and operated business on Woodward Avenue in Detroit. Later she led the establishment of a youth center, library, and archives for Bethel A.M.E., the second oldest black church in Michigan.

Gragg understood the needs of black women. In 1941 she founded a building for the Detroit Association of Colored Women's Clubs. In 1958 after being elected to the Presidency of the National Association, she succeeded in having the Fredrick Douglass home in Washington, D.C., declared a national shrine by Congress. She was known to fight for black people with skill, force, and money. She stated, “We cannot advance dependent on other people; we must build up an economic responsibility ourselves.” In 1960 Gragg was elected vice president of the Council of Women of the United States, affiliated with the International Council of Women of the World. She was the first black president of the Detroit Public Welfare Commission. Through the years she has fostered better relations between blacks and whites, serving as a lecturer on race relations.

Gragg died in 1989 and is buried in Section A2, Lot 200. She was inducted in the Michigan Women’s Hall of Fame in 1987 for her achievement in civil rights. She is remembered most for her concern for the struggles of African American women and for her work in her church and the Detroit community.